If you know of a child who is facing illness or hardship but is physically or geographically unable to attend our events, they may still be able to participate through our Pen Pals Program. If eligible, we will create a tailor-made artwork based on their favorite hobbies, activities, and toons then we’ll mail the art directly to them!
Application

We met a lovely young boy who despite facing a continual barrage of surgeries in an effort to combat his aggressive cancer, exuded strength, tenderness and a very sweet shyness.  From behind his mom’s leg, he peeked out and told us that his two favorite things in all the world are SpongeBob and pizza.  So we got together with the artists at SpongeBob in L.A. and asked if they could make up something that incorporated both things.  Well lo and behold, Kenneth got a hand-delivered pizza from SpongeBob himself!  He was so delighted, his smile beamed and his mom said she hadn’t seem him so happy in months.  That’s all we could hope for and are so grateful to have been connected with such a dear and brave boy! 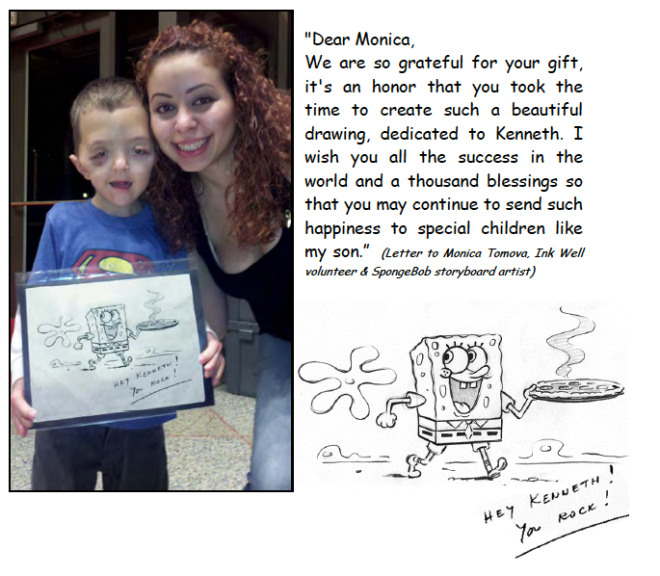 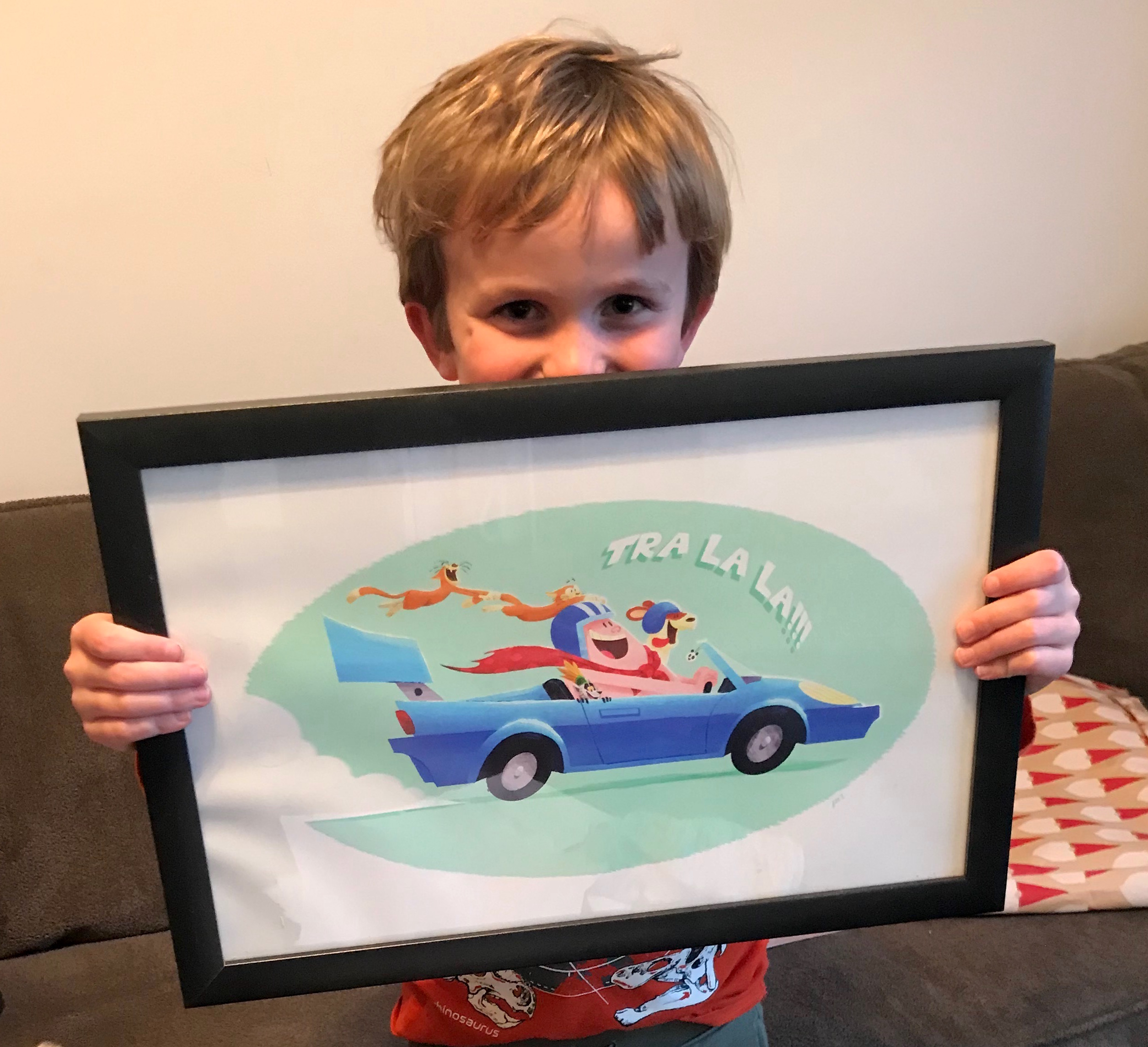 John was diagnosed with hydrocephalus, which requires brain surgery to release the pressure caused by a build-up of fluid in his head. At the time, John was living in Guam where his dad is stationed with the Navy but they don’t have a pediatric neurosurgeon on the island. So John, his mom and sister had to move back to the US on their own, find a new home, and start treatment as fast as possible.

John loves Captain Underpants more than anything (except for maybe his two big orange cats) and the film’s comedy helped keep John’s spirits up the most during this chaotic time.  So we wrote to DreamWorks Animation and asked if they could make up something special to show him Captain Underpants loved him too!  The Captain Underpants crew went above and beyond to create an artwork that incorporated all of John’s favorite things like Captain Underpants driving a sweet race car, Julien from John’s other favorite movie, “Madagascar,” a puppy because John hopes to one day be a dog trainer, and of course his own two gigantic cats!

We were able to deliver the art just days before Christmas and the same day that John’s dad finally got to reunite with his family back in the states.

We are eternally grateful to our West Coast Director, Joseph Scott, for connecting us with artist, Ivan Mendoza, and the rest of marvelous DreamWorks crew.  Enormous thanks to all those at DreamWorks who made this happen: Rachael Campanella, Connie Chu, Ivan Mendoza, Catherine Garcia, Peter Hastings, Nikita Huynh, Ashley Laidlaw, Peter McCown, Jeff Perlmutter, and Mark Taylor.

Sam deals with his severe autism in some pretty beautiful ways. His favorite show in all the world is My Little Pony. All on his own, Sam carefully designs his own My Little Pony characters and then writes stories for them.

Sam’s mom let us know that it would mean a lot to Sam to see one of his characters come to life. So we contacted My Little Pony artist, Diana Leto, and asked her to make him something special. Diana hand-painted a scene, based directly on Sam’s characters and plots and included a personal note just for him. We framed it all up and sent it to Sam and we’ve just received this note back from his mom:

The painting arrived and we are over the moon!!! So beautiful and personal. I don’t have the words to tell you how special and grateful we feel. Please know how valuable and meaningful you, the artist, and your organization are to our family.

Sam has been covering the painting with a blanket anytime someone is coming over so that he can do a grand reveal. We’ve had several now. He is generally not an especially affective child, however the smile and excitement he showed was palpable.

Thank you!
Maggie and Sam 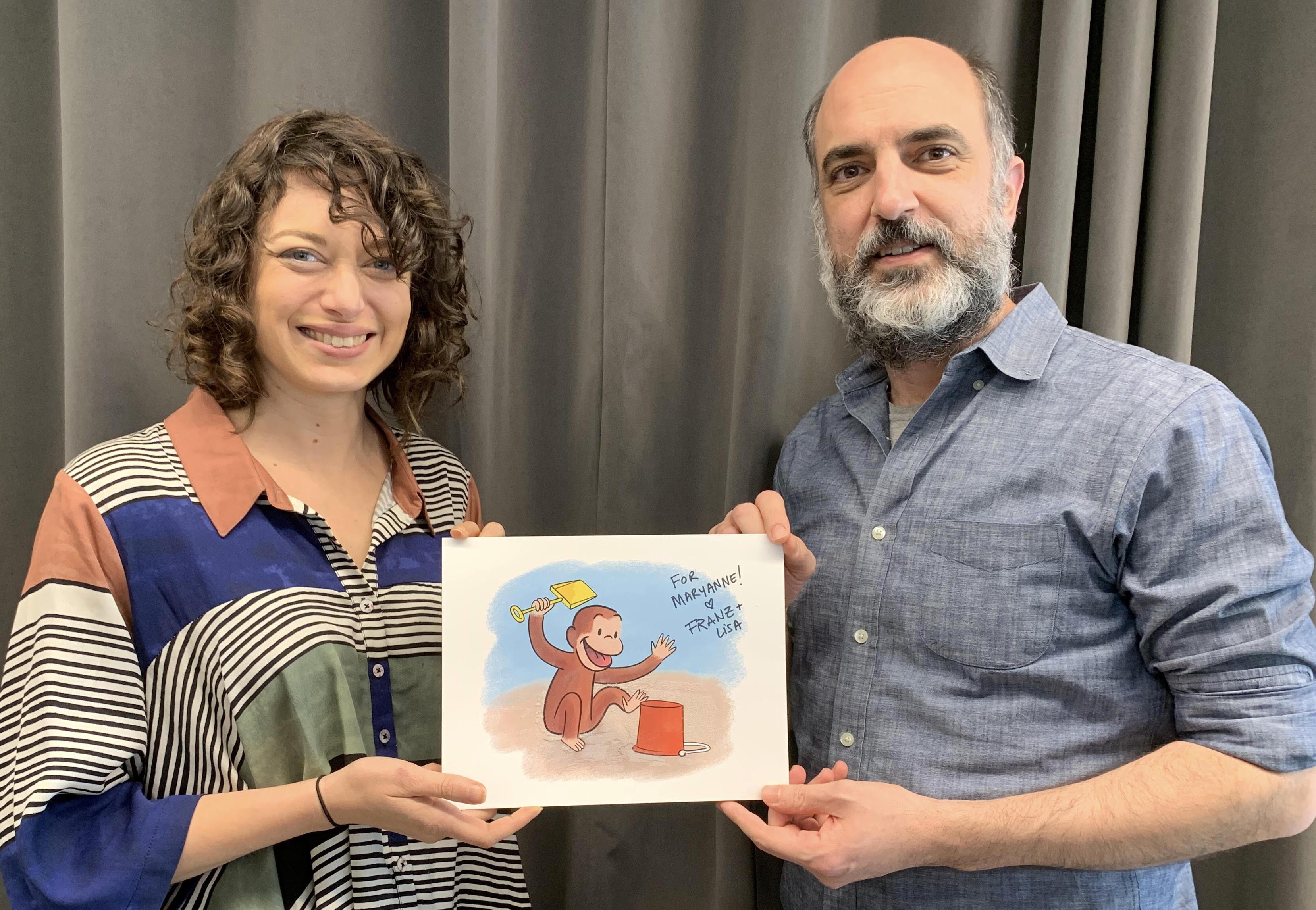 Maryanne was diagnosed with a rare condition, the vein of Galen malformation, when she was just a few days old. She has lived all her life without the ability to speak, she endures seizures and vision loss, but inside she is fully aware. Maryanne’s mom let us know that she absolutely adores Curious George.

Our Event Directors, Lisa LaBracio and Franz Palomares, both used to work on Curious George cartoons so after hearing Maryanne’s story, they knew exactly what to do. They took some heavy weight paper and drew our curious friend, playing in a sand box. They put a thin wash of glue over the box and used real sand so that Maryanne could experience the drawing with her sense of touch as well.

We framed it up and sent it off. Maryanne was recovering from brain surgery when the artwork arrived and her mother, Suzanne said that now she holds it and with a gentle smile, feels the sand and imagines herself playing with her favorite little monkey.

We are sending all our hopes of strength and recovery to Maryanne. Her quiet courage moved us so much. 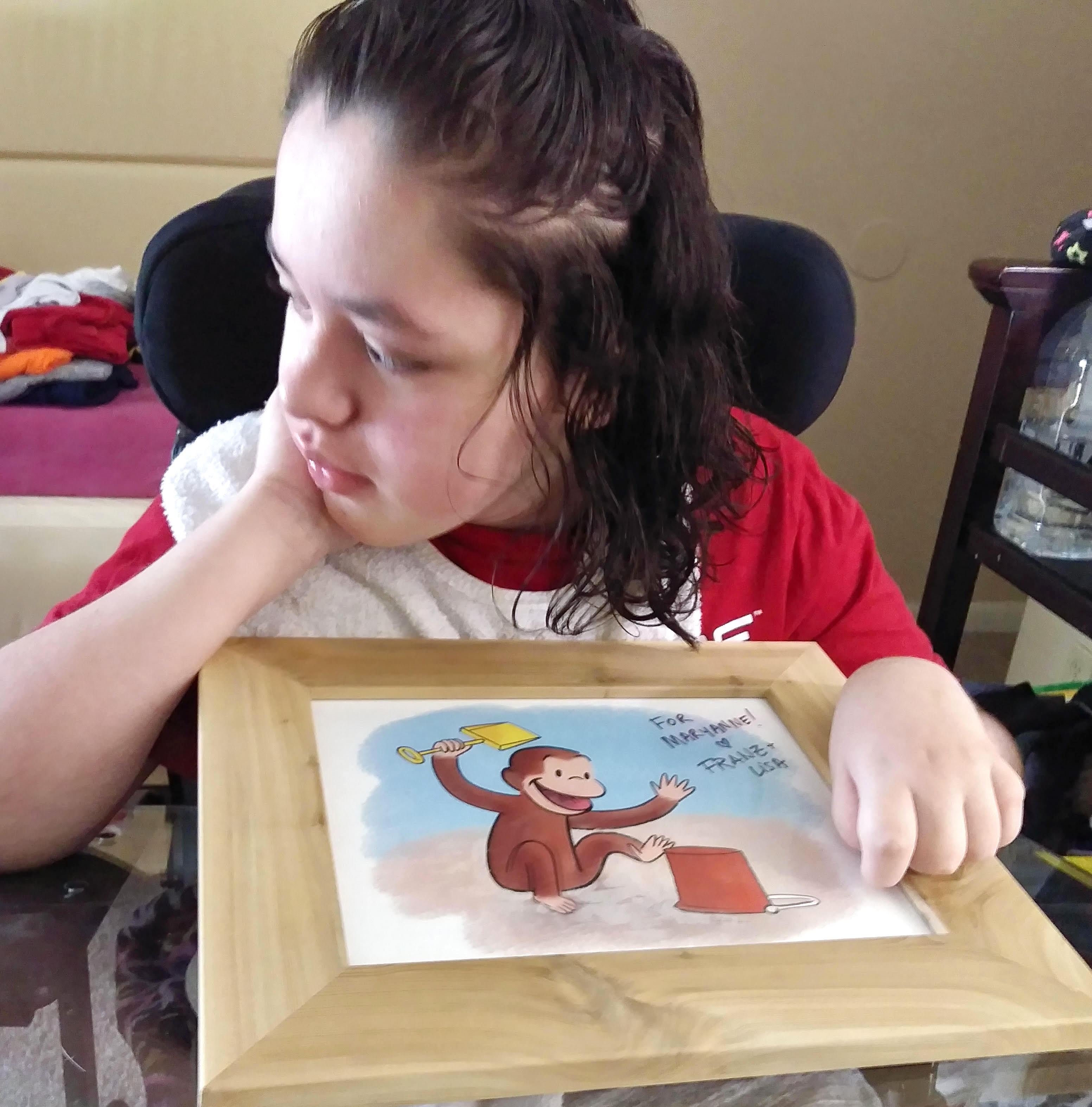 A huge thank you to Dennis Calero, who participated in our Pen Pals Program by making a very special artwork for a young girl, dealing with mitochondrial myopathy. Her father told us she loves Studio Ghibli characters, SpiderMan and Care Bears too so Dennis brought them all together in one lively outdoors scene, which we framed up and shipped directly to this Ink Well kid’s home. Her father wrote back to tell us she loves everything about it. We love everything about that. Thanks again, Dennis!